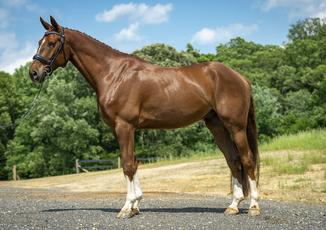 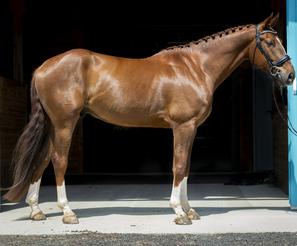 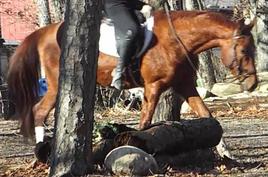 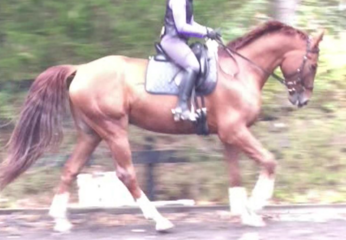 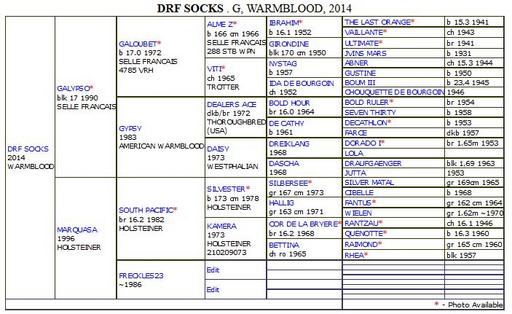 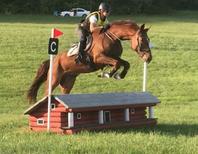 Galoubet A (1972 – 2005), Selle Francais stallion, bay, 173 cm, was ridden by the French rider Gilles Bertran de Balanda, a legendary stallion both as an international showjumper and as the sire of grand prix horses, including the international superstars Baloubet du Rouet, Taloubet Z and many more.
Galoubet was spotted by Gilles Bertran de Balanda as a five year old, and a few months later the pair won the five year old final at Fontainebleau.
In four years of competition Galoubet A placed either first or second in 22 starts at international level Grand Prix or Prix de Nations. He was named the Champion of France in 1977, 1979 & 1982.  He was retired to stud at 10 y.o. in 1982 and has since sired many top performers. 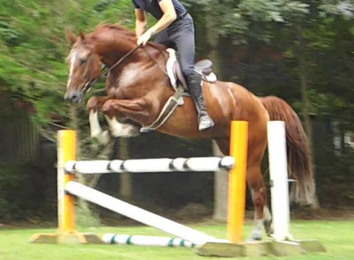 Quantum is a 17h big-bodied Warmblood gelding foaled 5/12/14.  He is an all-around diversified GEM!  Quantum is a very friendly & kind horse with a wonderful disposition.  Quantum has had some dressage shows/Novice Eventing and is schooling his flying changes currently and first level tests 2 and 3 confidently.  He is schooling 2nd level+ lateral work, including shoulder in, travers, renvers and walk to canter and counter canter.  He jumps 3' courses with scope for much more, and is also brave over cross country fences.   Quantum has fantastic rhythmic gaits  and his canter is AWESOME!  He settles nicely and gets right to work.    HE is a bit of a push ride, but not dead to the leg!

Quantum is the real all around package.  He is super flashy.  Would excel in hunters or equitation and also for sure.... Dressage.  Quantum Breeze completed his fourth show.  Four Dressage shows and one beginner Novice .  His scores are quite good in dressage.   Scoring 71% in First level Test 2.  Judges comments:  Wonderful horse, balanced, good canter lengthening and obedient.  Scoring 8's in the canter.   He is ready to move up and be someones show horse to bring along.  Quantum is talented enough for a professional, but has a brain that could also suit an amateur and or young adult rider with a trainer to bring up the levels.  He has no vices, clean legs and no soundness issues.   Quantum Breeze is at his home and schooling in dressage and learning his  flying changes in Manorville, NY.  Inquire for appointment.  CLEAN XRAYS !  Baybreezeestate@aol.com  TXT/Call 631 767 4972 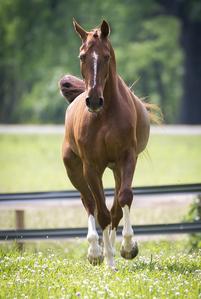